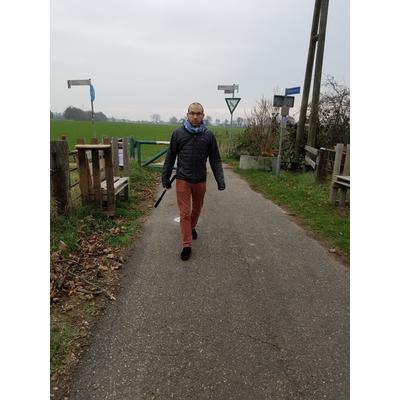 My father's family lived in Bocholt, my father Walter Stern was born there. His father was Moritz Stern, his opa Eduard Herzfeld. They owned a men's clothing and textile store. It seemed to be a successful store. Moritz Stern married my grandmother Hilde Stern, who was Eduard's stepdaughter.

In 1933, after the Nazis seized power, my grandfather would bicycle to all his customers in the Netherlands and in Germany to take the orders. Before, people came to his store. A friend of the family lived in Aalten, and they used to visit each other. And they had also family in Enschede. The relative's name was Harry Slager.

On Kristallnacht my Grandfather decided they had to leave, he feared for his life. On November 10th 1938, they drove to the border near Vehlingen, close to Isselburg-Anholt. A neighbour organized a limousine driver who drove them to the border. There, they waited in a ditch until the border guard went away on this bicycle. When he was gone, they ran across the border to a farm that lay half in Germany and half in the Netherlands. It was owned by a customer. The Dutch part was in Megchelen.

When I visited Germany last time, we found the farm and met the people who live there now.

In Megchelen they went to Jan Düking who called the local police to help. The police took them in protective custody in Gendringen, where they stayed for a few month. They were permitted to stay because their relatives in Enschede could pay their lodging and food.

While in Gendringen they stayed with two different families. My great grandmother stayed at the Cussel family. But my father was staying at the butcher Spier's house. My father was then 12 years old. My family was waiting for their furniture and then they moved to Enschede by July 1939.

On May 10th 1940 the Nazis invaded the Netherlands. My father told that his father and his uncle Kurt were arrested and were brought to Münster. Afterwards, my grandfather, Moritz, was sent to camps in France and from there to Auschwitz. I don't know what happened to Kurt, he is listed as "vermisst".

On October 3rd, 1942 my father, his mother Hilde Stern and her mother Selma Herzfeld were taken to a farm in Haaksbergen where they met a farmer. This man provided them a hiding space in the attic above his barn. They stayed almost three years in hiding. My father helped the carpenter build the closet that was in front of the entrance to the attic. He also helped with churning butter and ironing clothes while hiding in the attic. He passed his time making a chess set and listening to the news on the illegal radio. He was fifteen years old when he went into hiding.

April 1, 1945 the farm was liberated. Selma, my great grandmother, died on 7 May, just days after liberation of the Netherlands. She is buried in Hengelo. My father and my grandmother moved back to Enschede for two years and then moved to the USA.

I knew the name of the family who had offered them this hiding space; my father had visited them in 1991. My father made a video in which he told this part of his story. But only in 2017 I found the video again in which he talked about all the places he had been. He gave enough information so I could locate the Family Lansink. Last year I met them the first time.

Mr Lansink, the man whose father and grandfather hid my family, didn't live on the farm anymore, but he took us there.

Tracing my father's history, I discovered the names of many people who demonstrated courage, compassion, and kindness, risking their lives to help my family. I can identify 18 people.

I had no idea how I would feel coming to Germany, my father didn't want to come in 1991: He only visited the Netherlands. But I wanted to see the places he had been as a child and learn more about what happened to my family in Germany and Holland and I'm interested in learning from stories like this.

I'm visiting Germany now the third time. It is impressive to watch how carefully and thoughtfully the German government is coming to terms with the past and is trying to do the right thing. This was our impression. My son and I attended during our last visit in November 2018 a commemoration ceremony of Kristallnacht in Meudt, near Montabaur. A hundred years ago five families lived in this place; now the ceremony was attended by 70 people who all descended from these people.

And in Bocholt we met many wonderful people and made new friends. We even found the location of a photo from 1931 with my father standing in front of a building. It was the Gymnasium that still stands today.

Irene’s son, Josh, in 2018 crossing the border into the Nethlerlands where her father crossed with his family in 1938 5.38 MB

Irene and her family visit the former Lansink farm in 2018 and entered the attic space through a secret door 4.66 MB

Irene and her brother David embrace inside the former attic where their father, Oma, and great grandmother hid for 3 years 5.28 MB